The Future of Unmanned Aircraft Systems

Silent Arrow is enabled by recently developed and in-process Yates Electrospace Corporation (YEC) innovations in engine and propulsion technologies and in strategic suppression of acoustic and IR signatures to avoid detection. Through an innovative melding of emerging COTS technologies with YEC proprietary technologies and software, an entirely new level of price-to-performance is achieved at entrepreneurial execution speeds, at significantly lower cost, and with low environmental impact.

The Infinite Range Electric Flight technology comes from our seminal mid-air recharging patent “Long Range Electric Aircraft and Method of Operating Same,” which we presented at NASA Ames Research Center and at 2012 EAA AirVenture Oshkosh by invitation from EAA and from the Charles and Anne M. Lindbergh Foundation. 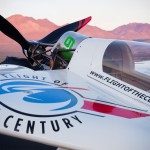 Our currently-flying manned technology demonstration aircraft uses an adaptation of our 258 horsepower all-electric powertrain and is being further developed for the demonstration of the world’s first mid-air recharge of an electric aircraft for the U.S. Navy, under our Cooperative Research and Development Agreement (CRADA) that is in place  between YEC and the U.S. Naval Air Weapons Station, China Lake.

Built by YEC in just two months, our technology-demonstrating X-IREF aircraft is the world’s most powerful and holds four world records, including the international record for the fastest electric airplane at more than 200 MPH.

For more information or for partnering opportunities, please contact info@flightofthecentury.com.