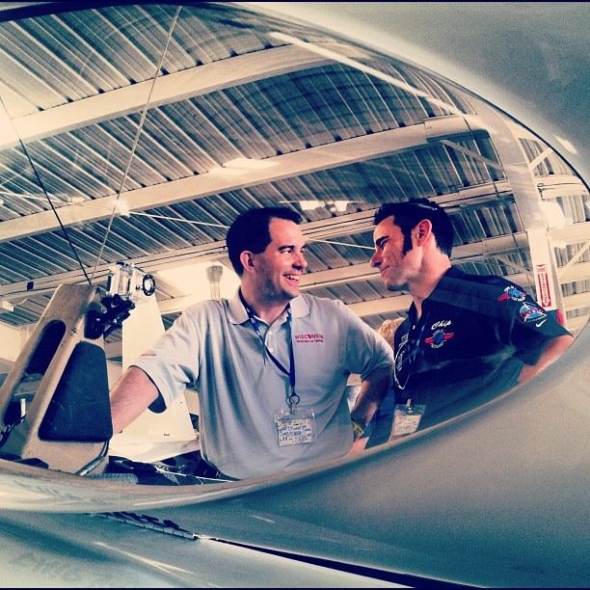 Tomorrow we pack up and tow home from 2012 EAA AirVenture OshKosh after an incredible week where we learned a ton and left our mark on the event by shaking things up and getting folks thinking outside the box about the future of electric aviation.  Our team of Tim Reynolds, Mike Beadle and I were humbled by the incredible response from the attendees, the hospitality from the EAA, and the wonderful support of the media.

I was honored to be an invited speaker for the Charles Lindbergh Foundation with a full speech on Thursday, and a short speech on Friday morning.  Then Friday afternoon, I delivered a 60 minute technical breakdown of the world record flight and deadstick landing to a standing room crowd in the Innovation hangar on behalf of AeroInnovate.

Friday afternoon, it was the honor of a lifetime to be featured in an hour long video shoot interview for the EAA’s “Timeless Voices of Aviation” video archive of the history and the future of aviation.

Also on Friday, we received a letter of intent from the U.S. Navy Air Weapons Station China Lake to finalize a contract for joint R&D in the UAV recharging of our electric aircraft platform – more news on this front to follow.

Saturday I had a great time with Bob Collins live on EAA Radio where we did a punchy interview about our rapid entrance into aviation and my thoughts on the future.

Associated with the show, we revealed the full length video of the 202.6 MPH record run with the deadstick landing, which is enjoying 30,000 hits in the first day of release! Link: http://youtu.be/rNAPLxZtoPg

I was honored to meet and chat with aviation legend Dick Rutan, and later with Wisconsin Governor Scott Walker during the AirVenture show week (photo of Gov. Walker attached).

Our next objective will be to build a fresh battery pack for the electric Long-ESA and install our front mounted recharging probe and demonstrate a mid-air recharge to further our Electric Lindbergh and military electric UAV program. I’m going to pay a visit to Mojave and get Dick to teach me how he refueled mid-air in his fighter jet in Vietnam!  Stay tuned.

We are fortunate to report the following exemplary mainstream media coverage from the past week:

Thanks very much for supporting us and stay tuned for some very exciting news as we work on the future of long-range, heavy payload electric flight!

Your friend in technology,