Photo: the Piper Charger that will carry the battery pack for in-flight recharging of the electric Long-ESA

Chip Yates has announced the winter-spring development and testing schedule for his groundbreaking world’s first mid-air recharge of an electric plane.

Yates’ now-famous Long-EZ (N89CY), popularly known as the all-electric world record setting Long-ESA (for “electric speed and altitude”), will be the flying testbed for UAV battery pack tethering, docking and shuttling technology and software development. The testing is the next step in Yates’ Lindbergh electric transatlantic flight planned for 2015-2016.

“Flight testing begins this month, with the conversion of our newly purchased recharge plane – a heavy-lifting Piper Charger shown above- that 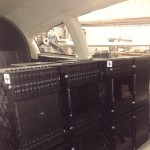 will need to carry a 600volt EnerDelPowered pack we’ve selected for the recharge,” says Yates. “If all goes well, we plan the first mid-air recharge for an April/May timeframe.”

Yates says he has been building his team, including two new engineers, for this landmark electric aviation feat. Both the recharge plane and the electric Long-ESA are berthed at Inyokern in the Mojave Desert, where the conversion, installation and testing will take place. Inyokern has been the site of most of the 8 electric world records set by Yates and his team in the Long ESA.

Small photos: At left, 700 volts of EnerDelPowered Lithium packs going into the recharge plane.  At right, Piper Charger with batteries and view of e-plane in background.